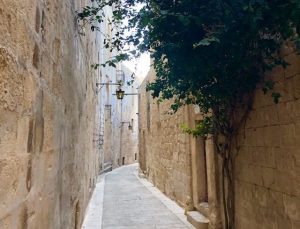 I am not a natural planner.  In fact, I strive to be flexible in general in order to leave options open.  Because I’m also an anxious person though, this can sometimes lead to a bit of a mental and emotional conflict.  For the past several months, I have been working with a client who loves to plan.  She thrives on knowing what she will do next and what to expect.  As an anxiety sufferer herself though, she tends to question her decisions relentlessly.  She will make a plan for child care, as an example, and then a couple days later be wracked with fear that it’s not the right choice.  Second guessing herself takes away her power and makes her feel incapable of managing her life.  Through some introspection on her part, and some encouragement on my part, we have found a way forward for her that has honestly been helpful for me in my personal life as well!

Those who suffer from anxiety know that typically, there are times when we are able to see things with clear eyes and a calm mind.  Depending on how much anxiety you experience, these moments may only last for seconds to a few minutes, but they are usually there.  What my client has found, is that in these moments of calm awareness, if she can look at a situation as a whole and make a plan during that time, all she has to do from that point on is follow it.  Using the child care example, she decided a while back after thinking through all of her options and looking at the factors involved, that she would start her baby in full time daycare at 2 months old.  She felt some guilt even while making the decision but had a deep sense of knowing that it was the right choice for her family.

As the days got closer to her daughter starting daycare, she felt very anxious and questioned her decision often.  I could sense that her hesitation to follow through on the plan was based on what she feared she “should” be doing according to specific childrearing rhetoric she has been exposed to most of her life, and not actual worries about the impact on her family.  She knew this was the best choice for all of them.  It was at this time she said, “I need to just follow the plan”.

This simple sentence came with such a visible sense of relief, it was palpable.  We talked through the factors that caused her to come up with this plan and how sure she felt about it at the time.  We talked through the role of anxiety in her questioning it now.  Then we made the decision that unless a new piece of information comes to light to warrant a different choice be considered, she will simply follow the plan and see it through.  This has resulted in her learning to trust herself and her ability to make good decisions in her life.  She is also realizing that sometimes, no matter how prepared she is and how much she plans, anxiety will just be there.  Gently reminding herself that she is doing her best and will not allow her anxiety to make decisions for her has helped a great deal. 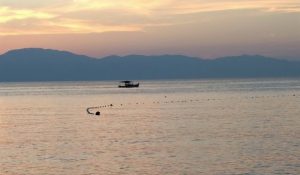 The holidays are upon us but not everyone is feeling festive.  For many people, the holidays are a time for remembering the family you aren’t speaking to, finding yourself without a romantic partner for yet another year, or realizing you don’t have the money you were hoping to have for gifts or travel.  The amount of pressure on people to be happy and joyful can feel overwhelming and just one more thing to “fail” at.  From the music reminding us that being home for the holidays is the most important thing in the world, to the commercials telling us that if we don’t buy our children every latest toy and gadget, Christmas morning will be a letdown, it’s easy to resent this time of year and the jolly people around you.  So, what to do?

I often talk with clients about the idea of self-care being part of their daily routine as it builds resiliency, helps maintain consistent moods, and reminds us to value ourselves.  This time of year in particular though, it is even more crucial. Maybe you’re spending Thanksgiving or Hanukkah alone this year – that could easily lead to feelings of worthlessness, isolation, or sadness.  What about instead of indulging too much in those feelings, you acknowledge them, then remember that there are benefits to enjoy such as time to yourself for relaxation and activities you value?  Also, reflecting upon how you’d like the holiday to look next year and steps you can take to create that.  Maybe you are alone this year because you’ve been doing difficult work on yourself and have chosen to set personal boundaries and not have toxic relatives in your life anymore.  Celebrate that!  You now have the freedom to make your own traditions and spend the holiday how you’d like, without worrying about others’ unhealthy expectations.

Another difficult part of the holiday season can be remembering past Thanksgivings, Christmases, etc when you had loved ones in your life who have now passed.  Even if you’re coping well in your daily life, feelings of grief can rear their ugly head this time of year.  It may not feel worth celebrating without this important person in your life.  What if you created a place for them in your day?  Maybe create a special ornament in their honor and place it on your Christmas tree as a token of remembrance.  Or maybe light a special candle for them through Hanukkah.  However you celebrate, find a way to incorporate this person into the festivities.  Nostalgia is a powerful feeling when mixed with loss and if we’re not careful to acknowledge it, we could become depressed this time of year.

There are many reasons why it could feel difficult to get into the holiday spirit and feel thankful, but being kind to oneself and not judging the struggle is the important thing.  After all, isn’t expressing gratitude to ourselves for our strength and ability to make it through another year one of the best gifts of all? 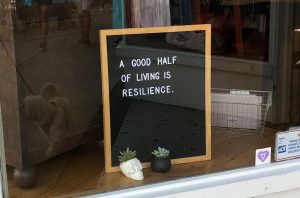 “A good half of living is resilience.”  I was wandering down the street glancing into shops when this quote, pictured above, in a shop window stopped me in my tracks.  As a therapist, I know the importance of resilience when recovering from traumatic experiences.  It is vital to have things like coping strategies to use in order to move on.  What if we broadened the idea of “resilient living” into everyday life though, not just when focusing on trauma recovery?  For many years, I specifically did domestic violence and sexual assault counseling.  Every client I worked with was either currently being abused or had previously been abused in some way.  The bulk of our sessions together would focus on rebuilding a sense of self-worth, understanding how to manage triggers, learning to trust others again, etc.  All of these tasks centered around resiliency with an outlook towards the future.

Now, although I still do some trauma recovery work, I have shifted to working with clients who have concerns such as boundary setting, coping with life transitions, developing healthy relationships, managing anxiety, etc.  When I saw this sign in the shop widow, it struck me that every single person I have worked with has one thing in common: the need to build resiliency into their daily lives.  Bad things will inevitably happen to all of us.  Life will throw us unexpected curve balls, teach us painful lessons, and break our hearts.  There is no avoiding that.  I think knowing we lack control over our existence is scary for a lot of people as we so desperately want to avoid suffering and be prepared for what’s coming.  What this quote got me thinking about is the idea that building up our resiliency reserves can actually give us a sense of control when negative things happen because we’ll be better equipped to cope.  The time to focus on resiliency is now, before crisis hits and you’re overwhelmed.  Here are three ways you can create and foster resiliency in your everyday life:

Give resiliency some of your attention and be intentional about building it into your life…  You will appreciate having the reserve ready for when you need it!